Who's Who Omnibus Vol. 2 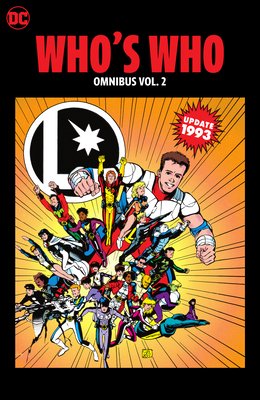 DC's encyclopedia of heroes and villains steps into the 1990s in this massive hardcover continuing the classic Who's Who biography series! In the 1980s, DC exhaustively catalogued their massive roster of heroes and villains with the Who's Who series, presenting encyclopedia entries for their iconic characters and locations. In 1990, with a new decade dawning, DC debuted follow-up series Who's Who in the DC Universe--presenting updated entries on timeless heroes like Superman and Wonder Woman, along with characters that defined the era like Lobo and Shade the Changing Man. Each entry is illustrated by top comics artists including Chris Bachalo, Colleen Doran, Kevin Maguire, and Adam Hughes. The 1990s version of Who's Who is collected in this massive hardcover omnibus, following 2021's popular Who's Who Omnibus Vol. 1!
Who's Who Omnibus Vol. 2 also includes spinoff series Who's Who in the Legion of Super-Heroes, spotlighting DC's greatest team of the 30th century. This volume collects Who's Who in the DC Universe #1-16, Who's Who in the Legion of Super-Heroes #1-7, Who's Who Update 1993 #1-2.
Vis hele omtalen… Vis mindre